When starting playing the Neverwinter, the Cloak Tower is the first group dungeon you'll face. Check our dungeon tactics to group play more quickly for The Cloak Tower especially if it’s your first try of this dungeon.

The Cloak Tower is a group dungeon from level 14 to 20. An average group of level 15-18 players should have no problems completing the dungeon. The queue system has various restrictions in level, but the guts-and-glory method of bashing skulls on your way to the entrance is not limited.

Unlike later dungeons you'll encounter in your travels, the cloak tower has neither puzzles nor any real strategy that must be solve in order to defeat the bosses. In your explorations, you’ll encounter plenty of enemies, solving two puzzles for extra loot, discover two secret doors for more loot, and face plenty of traps. All this while you attempt to make your way down to the bottom level in search of a particularly brutal Orc, Vansi Bloodscar, and Commander of the Many-Arrows Tribe.

Before you start to fight in The Cloak Tower, you will find a fire pit for healing, a merchant that sells profession kits and buy scrap from you in the tower. Profession kits allow you to loot a wide assortment of crafting materials found throughout the dungeon. So when crossing the dungeon, better to pick up crafting materials, as well as any health potions which help you remain strength and keep alive.

Most Orcs in The Cloak Tower have the same appearance and names of their Tower District brethren. But don't be fooled into thinking they're weak or easy to kill. These bunches of Orcs are faster, stronger, and more powerful in many ways. For example, the longer you leave that Eye of Grummish Orc standing, the more Drudge Orcs he's going to summon to take part in killing you and your group. There will be red warning indicators on the floor at the time you are in battles. Ignore them will take large chunks of health from you in a hurry. Fight smart and you'll be fine. 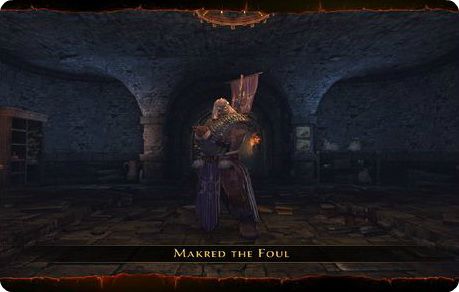 The Cloak Tower has three bosses which have to be defeated by your group: Makred the Foul, Orc Commander, Vansi Bloodscar. There is an optional boss in between these, named Throg the Ravenous. Each boss will drop a rare (blue) piece of equipment for your group to roll. They also drop a pile of Lion Seals that all players can collect. The piles of Lion Seal can be used to purchase special equipment from a vendor back in town. While each battle can be survived with just some skill and perseverance, there are some distinct strategy suggestions we can suggest. During the battles with the bosses, be aware that the normal control skills that affect a target’s movement or ability to attack will have no effect on these bosses. They have immunity of controls.

The first boss in the Cloak Tower is Makred the Foul who is twisted caster with a taste for blood, which is a relatively easy one for he doesn't summon a lot of additional Orcs. The following is Throg the Ravenous, which is optional and can be bypassed by going left at the fork instead. But if your group choose to fight, it will be a very hard one. So suggestion for Throg the Ravenous is to ignore him.

The last boss is Vansi Bloodscar. This will be a heavy fight. The boss is like a tant and has strengthened armor, and a steady stream of Drudge Orcs making their way into battle. A suggestion is to take a slow approach. Better to have a Guardian Fighter and a Cleric in your group, and let them deal the boss. The rest members go to take down adds Orcs in a quick speed.

We previously mentioned two secret doors that can be opened and can gain you extra loot. They can be a little hard to find, but kill them all and two secret doors will open revealing a chest for everyone to loot.

The two puzzles previously mentioned involve finding three objects for each within the Tower and placing them on altars in the exit room. One altar requires three crystals while the other requires three plants. They can be a little tricky to spot, but as long as your group works together and keeps their eyes open, you'll have no problems. Since killing Vansi doesn't result in a loot chest, then solving these puzzles is the only way to make any chests spawn before you leave. 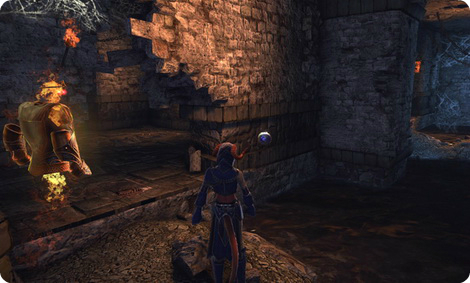 The three crystals in red, green, and blue color are the easiest to find. The red crystal is on a table in the room where you killed Mazred the Foul. The green crystal is on a table within the Apprentice Chambers in that general area. The blue one is a little harder to locate, which is at the edge of the pool at the bottom of the blue crystal garden. Walk around the edges of the pool of water and you'll see one crystal out of all the other blue crystals that has floating dust around it. When you get to the exit room, place all three crystals on the altar and a chest will appear.

The three plants are a little easier. The Starflower is on a table, once again in the room where you killed Mazred the Foul. The glow berries can be found at the fork in the Botanical Gardens, where going right and down leads not only to the Throg the Ravenous, but the final plant as well. Grab the Gingershroom he drops and you're all set. Place all three items on the other altar in the exit room and a chest will appear.