This guide aims to provide all of the most critical information that you need to know so that you can play a Restoration Druid, at level 90 in PVE content. It covers talents, glyphs, stats, reforging, and rotations. since you are level 90 you will be able to take the basic information and run with it, simple topics like addons, macros, targeting, and more are not covered.

The Role of a Restoration Druid

As a Restoration Druid your role in a group is to provide healing. A restoration druid provides much of their healing in the form of Heals Over Time (HOT). This is different than most other healers who provide most of their healing as direct healing. This makes them ideal for keeping groups of players up or for providing steady healing over time to a tank while a direct healer takes care of the spike healing. Just a few of the abilities and benefits that a Restoration Druid can provide to a group in addition to healing are as follows: 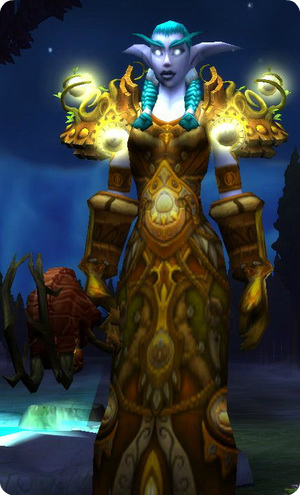 Restoration Druids has seen multiple different talent rebuilds over the years, so it should come as no surprise to players that they changed yet again in Mists of Pandaria.

Nature's Swiftness (Tier 2 talent) - This talent grants you the ability to cast several of your spells instantly and for free on a 1 minute cooldown. Those abilities heal for 50% more and last 50% longer.
This talent is pretty much manditory as it provides an "oh crap" heal button. You can instantly cast your big Healing Touch spell instantly and for 50% more healing. There isn't really another choice that is even close at this level.

Incarnation: Tree of Life (Tier 4 talent) - This talent increases your healing by 15% and your armor by 120% for 30 seconds on a 3 minute cooldown.
This is a great cooldown that allows you to heal quite a bit more, as well as protecting you from some incoming damage. Make sure you stack it with nature's vigil for best effectiveness.

Nature's Vigil (Tier 6 talent) - This talent provides a 3 minute cooldown ability that boosts all healing and damage by 20% for 30 seconds. In addition any damage that is caused heals nearby allies for 25% of the damage done and any healing done deals 25% damage to a nearby enemy.
This is another great talent that provides a solid healing boost on a 3 minute cooldown. It will also allow you to do some minor damage while healing, which is fun, but pretty meaningless. Combine this with your Incarnation: tree of life and any other cooldowns you can, such as heroism.

Glyph of the Lifebloom (Major Glyph) – Grants whatever the current stacks of lifebloom where on your previous target to your new lifebloom target.
This is a great glyph for several reasons. The most obvious is for tank swaps in a fight, as it allows you to instantly have a full stack of lifebloom up on your new target right away. The second reason is equally important if slightly more akward. It is for those times you screw up and hit lifebloom on a player that you meant to put a different heal on. This glyph allows you to cast it back on the tank right after and you will have only lost 2 global cooldowns (1 for the mistake and 1 to move the stack back to the tank) instead of 6 (1 for the mistake and 5 to bring the tank back up to a full stack). These things happen, and this makes it less of an issue.

Glyph of Healing Touch (Major Glyph) – Reduces the cooldown of swiftmend whenever you cast Healing Touch.
This is a great glyph for if you are a tank healer since you will be using healing touch anyway. If you are a raid healer it is still useful as your go to heal when you get an omen of clarity is healing touch, but it is not as useful.

Glyph of the Wild Growth (Major Glyph) – Wild Growth heals 1 more target but the cooldown is increased by 2 seconds.
This is a good glyph if you primarily raid heal in 25 player groups. Here the extra healing provided is well woth the 2 seconds extra on the cooldown.

It is critical to understand your stat priority for any class as going after the wrong stats can dramatically lower your healing output.

When reforging simply follow the stat priority above for Restoration Druids and move the lowest stat to the highest stat that the piece does not have on it. Remember to adjust priorities if you have enough spirit to last through a fight, or if you have more haste that a breakpoint but not enough to reach the next.

There are several cooldowns available to you as a Restoration Druid. 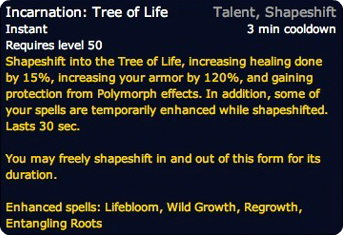 Incarnation: Tree of Life – This is best used in combination with Nature's Vigil. It provides 15% extra healing for 30 seconds on a 3 minute cooldown.
Nature's Vigil - This stacks with Incarnation and should be used while it is active for best effect.
Nature's Swiftness– This is a one minute cooldown that lets you cast your next spell (from a select list) instantly and for free. Healing spells will heal for 50% more and if the spell has a duration, it lasts 50% longer. You are best using it with Healing Touch for a big heal or Rebirth to do it without the long cast time.
Rebirth - This is a major cooldown as it is one of the few abilities that can bring a player back to life during combat. It has a 10 minute cooldown, so it is really only once per fight. Save it for a tank or another healer.
Innervate - Use this in any boss fight that you are in as soon as you are down to about 75% mana, that way in a long fight you may get a chance to use it again. If you have enough spirit that mana is never an issue then you should use it as soon as another healer is down to about 85% mana at the start of a boss fight, so that you can use it again later.

When healing there really is no rotation, it is all situational. However there are key heals that should be used for maximum effectiveness.

The most used heals for a Restoration Druid healing a single target are:

Lifebloom – Keep a full stack of 5 up on your main healing target. Do not refresh with lifebloom but instead use any direct heal to refresh it (nourish, healing touch, and regrowth all refresh the stack).
Rejuvenation – Keep this HOT up at all time on your main healing target, also allows Swiftmend.
Healing Touch or Regrowth - Use whenever Omen of Clarity procs and makes these heals free. Use to heal or just to refresh lifebloom for free.
Nourish– Use whenever you need to refresh lifebloom but have not proced omen of clarity.
Swiftmend - Use whenever you need a quick heal on the target. Also heals everyone nearby. 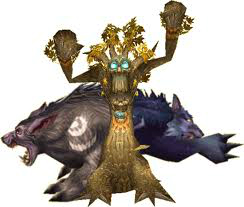 Druids make awesome AOE raid healers and better yet the abilities are fairly easy to figure out and use.

When raid healing you should base your healing on the following:

Wild Growth - Use this on cooldown to heal groups of players nearby.
Rejuvenation - Keep active on players taking damage so that you can use swiftment on them for AOE healing and to ensure omen of clarity procs.
Swiftmend - Use whenever there are several players with lost health.
Wild Mushrooms - Use for mass AOE healing. Ussually best setup before a fight, or only as needed in fights that require mass AOE healing at certain phases.
Tranquility - Use whenever the whole raid has lost significant health.