Star Wars: The Old Republic (SWTOR) is developing a committed community of players with more than 1.7 million active subscribers and growing. Here i will share some Jedi Guardian Guide for you. 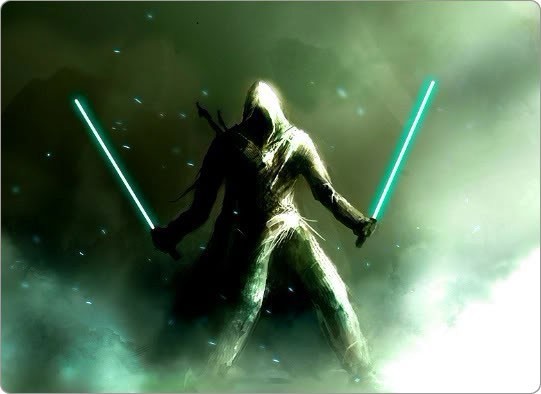 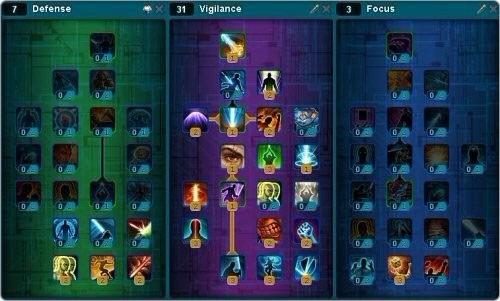 Vigilance is a DPS tree that uses the heat from the lightsaber to burn the target.

• Dispatch: Throws the main-hand lightsaber at a target, dealing energy damage. Only usable on targets at or below 20% max health.
• Opportune Strike: Punches the target, dealing kinetic damage. Only usable on slowed or immobilized targets.
• Pommel Strike: Bashes the target, dealing kinetic damage. Only usable on incapacitated targets.
• Force Kick: Kicks the target and interrupts its current action, preventing that ability from being used for the next 4 seconds.
• Force Leap: Jumps to a distant target, dealing damage with the main-hand weapon, immoblizing the target for 2 seconds and interrupting the target's current action. Builds 3 Focus.
• Saber Throw: Throws the main-hand lightsaber at a distant target, inflicting damage and building 3 Focus.
• Combat Focus: Immediately generates 6 Focus.
• Sundering Strike: Strikes the target for damage, and reduces the target's armor by 4% for 15 seconds. Stacks up to 5 times. Builds 2 Focus.
• Overhead Slash: Executes an acrobatic attack that deals weapon damage.
• Plasma Brand: Engulfs your lightsaber in fiery plasma, dealing elemental damage to a target afflicted by Sundering Assault, with further elemental damage over 12 seconds.
• Shien Form: Enters an aggressive lightsaber form, increasing all damage dealt by 6%. All attacks that cost Focus will refund 1 Focus when used. In addition, you generate 1 Focus when attacked, but this effect cannot occur more than once every 6 seconds.

A Vigilance spec Guardian is also rather easy to play. At the start of the fight, and at any points where big cooldowns line up, using Saber Throw, Force Leap and Combat Focus will max out your Focus allowing you to open up with a high damage burst if needed. Or keep the Focus high while going through your rotation on longer fights. Overhead Smash is your strongest attack, followed by Plasma Brand. Any time you are able and both Plasma Brand and Overhead Smash are on cooldown, Opportune Strike and Pommel Strike deal very high damage. If none of those are available, then Blade Storm has a very high chance to crit, but doesn't deal as much damage. If by chance even that is down, Force Sweep doesn't do much damage but is a free attack. Sundering Strike will be your main use attack however, as it debuffs the enemies’ armor and grants you three Focus. Use it on cooldown, likely every third attack. Under 20% health, Dispatch takes priority over all.